12 Essential Herbs for Your Kitchen Garden

Herb gardens are easy to care for and highly rewarding all summer long. Few plants are more satisfying to grow than fresh herbs. While they may not boast stunning blooms, they often carry a stronger scent than most flowers. The density of aromatic compounds in their leaves means that a little goes a long way in the kitchen, and unlike vegetables, they can be harvested continuously all summer long. 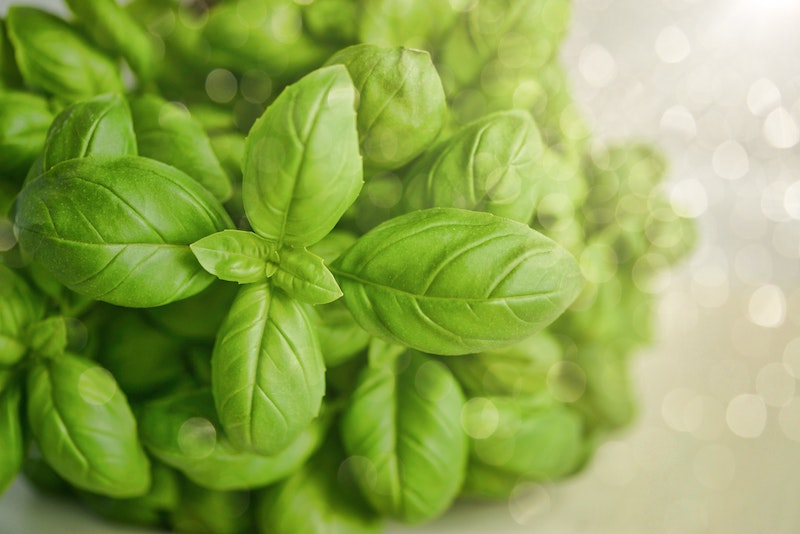 Best of all, herbs are compact, making them perfectly suited for pots on your back patio, where they can be kept close to the kitchen. Needing little more than ample sun and regular gardening, herbs are easy for even beginner gardeners. Having a selection of herbs on hand will be readily appreciated by experienced cooks, while those who are new to cooking will soon feel like professional chefs when they see how much fresh herbs enhance their cooking.

If you’re a novice to growing fresh herbs for your kitchen garden, start by thinking about what foods you like to prepare for yourself, or which herbs you buy most when at the grocery store. If you’ve grown herbs in the past, we’ve included a few cooking ideas for each herb that may inspire you to try something new.

Few herbs are more strongly associated with the summer months than basil. While it is a beloved ingredient in cuisines around the world, it has a special place in Italian cooking where it can be found in everything from sauces to salads. Basil is a tender herb that does not withstand long cooking times but can be added fresh to almost anything.

Grow in a small pot on your porch and harvest regularly to prevent it from going to seed. To store fresh-cut basil, place stems in a jar with about an inch of water, and cover loosely with a plastic bag.

Known for its fragrant, piney scent, rosemary has a long history as both a cooking herb and as an aromatic in perfumes. Unlike basil, rosemary’s fibrous structure means it holds up well under long cooking times making it a powerhouse in soups, stews, and roasts of all varieties.

Planted outdoors, rosemary can grow to the size of a small shrub, but will not last the winter in cold climates. Instead, potted rosemary can be brought indoors during the winter months, where it will benefit from the occasional cold draft from an open door or window.

A hardy herb with a woody flavor profile, thyme can be added whole to stews or roasts, but the leaves should be stripped from the stems before being added to fresh dishes or used in baked goods.

A low-growing herb, thyme looks especially attractive spilling over the edge of a flower box, but it can also be brought indoors when the weather cools off where it can enrich dishes throughout the winter months.

If you’ve ever wondered why mint tastes so cold, it’s because the chemical menthol, which gives it its distinct flavor, contains a protein that activates the nerve cells in our mouths in a way that our brains interpret as cold. Given the chemistry involved, it’s not hard to understand why mint is such a ubiquitous herb in summer dishes.

Mint plants send out running roots that mean they can be hard to control in a garden bed. Grown in pots, they do best with partial shade and plenty of water.

Closely related to oregano, marjoram is a staple of cuisines throughout the Mediterranean, and is a common ingredient in both herbes de Provence and za’atar. It has a complex flavor, sometimes described as sweet, woody, or citrusy.

Grown in pots, it does well in a sunny spot with well-draining soil. It is not cold hardy and should be brought in during the winter.

Known as the “pizza herb” for its use both as a topping and in sauce, oregano has an earthy and sometimes bitter taste that pairs well with meats and roast vegetables and which can grow more intense when dried. It is also closely related to marjoram, and is sometimes referred to as “wild marjoram.”

In an herb garden, oregano benefits from full to partial sunlight. It also prefers drier conditions, so plant it in a terracotta pot, which has a more porous structure that aids drainage.

Having a selection of herbs on hand will be readily appreciated.

Slightly bitter and with a strong, grassy flavor, parsley is one of the most widely and generously-used herbs around the world. It can be used as a topping or garnish on a variety of dishes, is a primary ingredient in some salads, and blends into a range of green sauces that can be used as condiments for your main course.

Parsley is a quick-growing herb that will rapidly replenish itself if you harvest it regularly. If your parsley starts to get out of hand, you can harvest it and store it upright in the refrigerator with the ends in a jar of water, where it will keep for a few days.

Many people are torn on cilantro, with some prizing it for its fresh, citrusy flavor, while others taste only soap. This is due to a genetic variation some people possess in their olfactory receptors that increases their sensitivity to the particular aldehyde compounds found in cilantro that give it its distinctive taste.

If you’re of the more fortunate group of people who don’t have this genetic variation, then you’re probably used to enjoying cilantro on dishes from cultures as wide ranging as Mexico, India, and Thailand. Its applications are endless, if you don’t have to contend with the soapy flavor!

Sage has an earthy, peppery taste with brighter notes that can range from lemon to mint. Although its leaves have a soft, velvety texture, it withstands long cooking times and can also be dried to prolong its use through the winter months.

Sage prefers mild weather and grows best in the spring and fall. It also requires roughly six hours of full sun during the day, but if you live in a hot climate it may be best to place your sage somewhere where it will get some shade during the peak heat of the day.

A member of the onion family, chives are a great way to add a mild garlicky flavor to almost any dish. They pair well with most savory foods, and can be stored in the freezer, but lose their flavor when dried.

In the garden, chives are a natural repellent to many garden pests, including aphids and Japanese beetles. However, they can also take over your garden if not managed carefully, so we recommend planting in pots and removing any flowers before they can spread seeds.

With its sweet, anise flavor, tarragon is an unmistakable herb in any recipe. It gives its distinctive taste to béarnaise sauce, and is a staple in many French kitchens. Regular harvesting is important to promote growth, and cuttings can be frozen or dried for later use.

When planting tarragon give it plenty of space and full sun. It can be grown in a pot indoors year round, although it should primarily be harvested in the summer. It also benefits from being divided every few years, especially if grown in a container where it can become root bound.

Dill is a team player with many other kitchen herbs, making it a useful addition to any kitchen garden. A popular herb across much of northern Europe, it is best known for its use in pickling, and is also paired frequently with fish.

With its delicate, frond-like leaves, it does better in cooler climates and prefers well-draining soil. When harvesting, water a day ahead of time and harvest older leaves before newer ones. Cut dill can be stored wrapped in a damp paper towel in your crisper drawer, or upright in a jar with water. 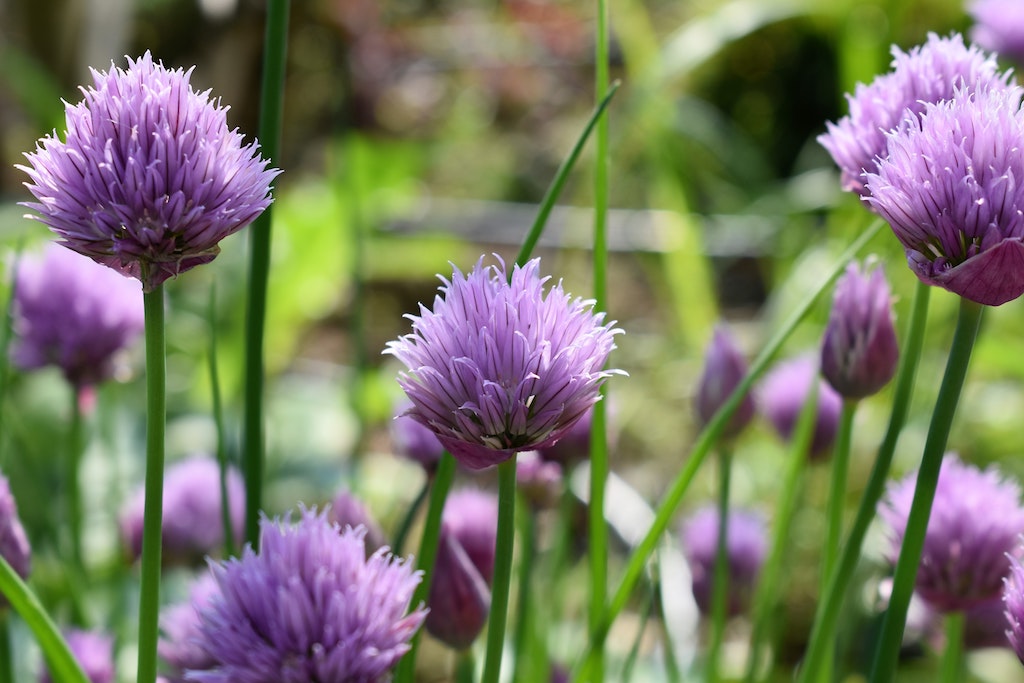 Frank’s is here to help you with all your garden needs.

Whether you’re a budding chef or a blossoming gardener, Frank’s can help you grow the herb garden of your dreams. Follow us on social media, share pictures of your herb garden, and tell us your favorite home-grown recipes. 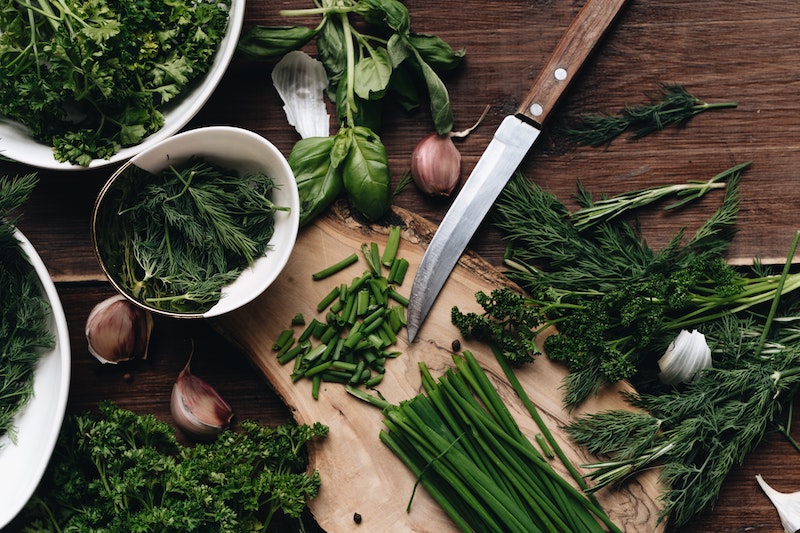 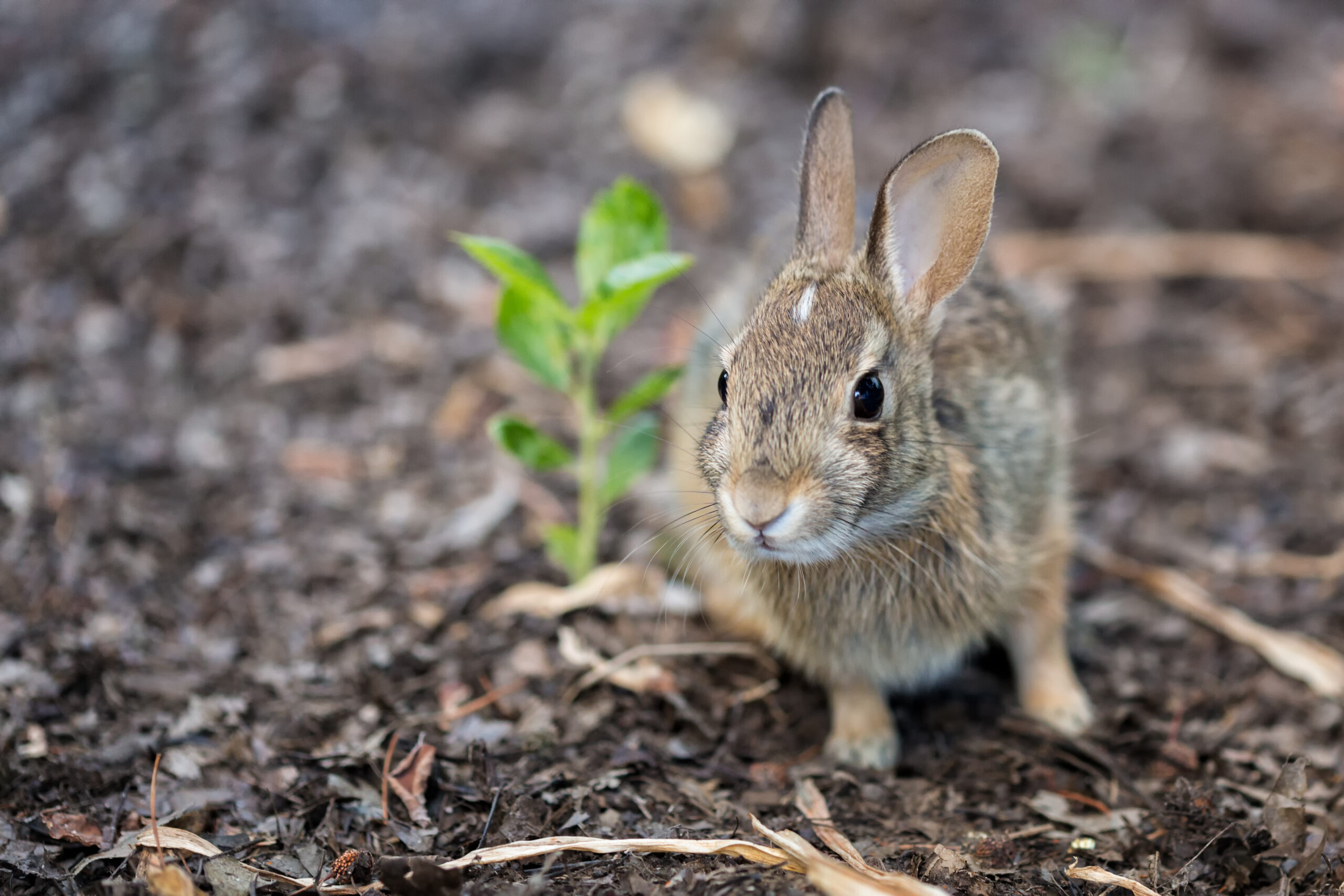 How to Keep Rabbits Out of Your Vegetable Garden

Rabbits may be cute, but every gardener knows the havoc they wreak on unprotected garden beds. 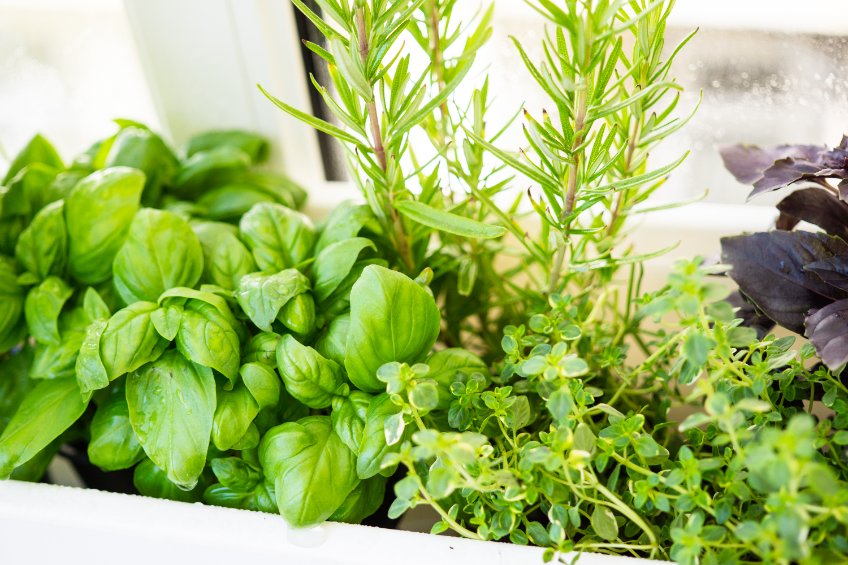 12 Essential Herbs for Your Kitchen Garden

Best of all, herbs are compact, making them perfectly suited for pots on your back patio, where they can be kept close to the kitchen. 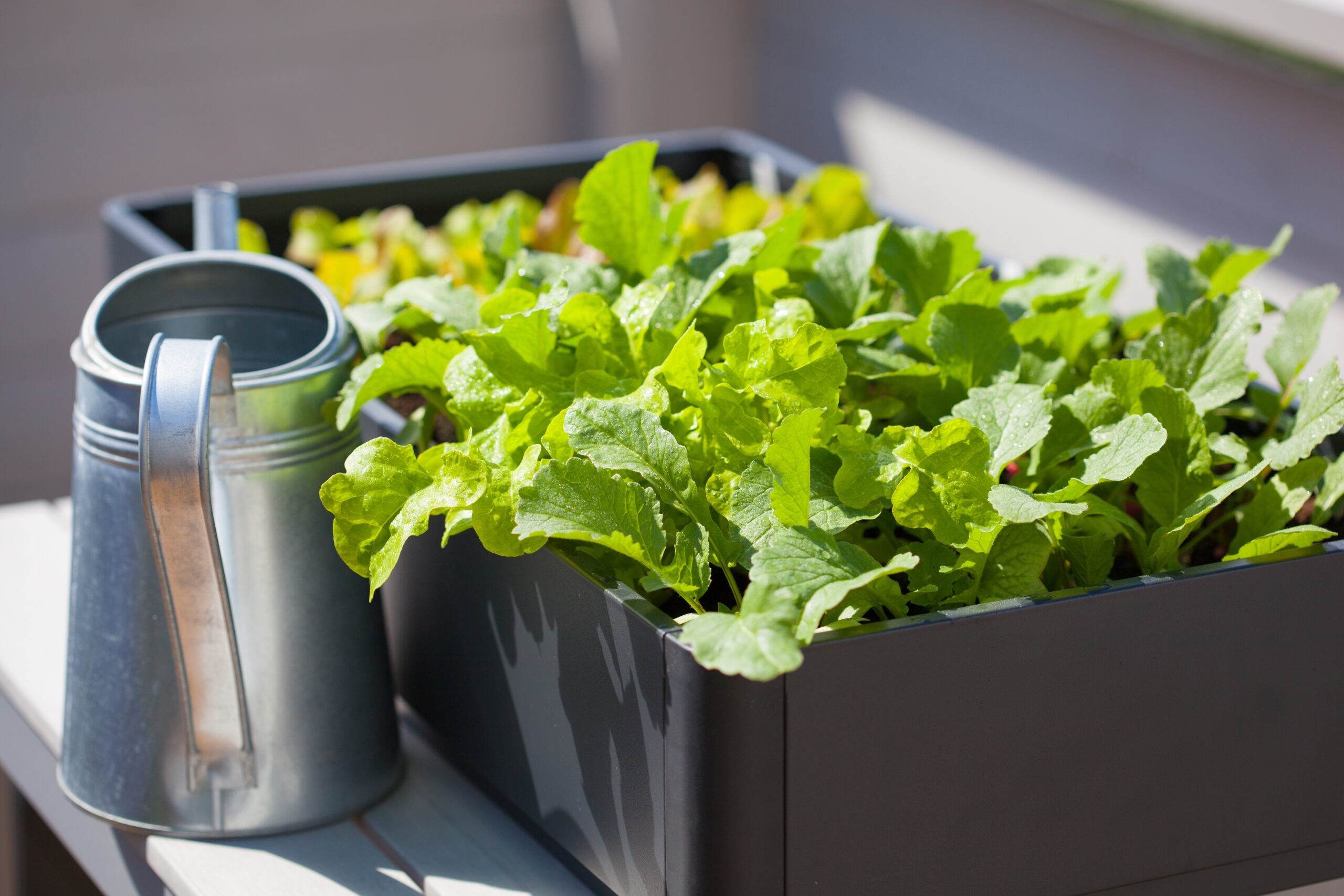 How to Plan a Vegetable Garden for Your Back Deck

Even with limited space, home-harvested produce is an achievable goal for almost every gardener.